One of the best Seattle restaurants I have been to so far. A solid number, not pretentious, yet serving grade a quality food at a reasonable price.

Entrance: Welcoming, nice bar in front, restaurant to the side.

Restaurant: Overlooks the river but views are not why you come here. They don't do brunch but the room is perfect for it - open, light, unpretentious.

Price: Not too eye watering but expect 20's and upwards for entrees.

Posted by SeattleGrubster at 20:57 No comments:

A regular haunt of ours, mainly because it's close to where we live, good value for money, very good quality food, friendly service, kid friendly and bring you fresh Foccacia bread with balsamic and olive oil as soon as you sit down.

I like it a lot and think you should too.

Posted by SeattleGrubster at 18:33 No comments:

Saltys for Brunch at Alki I like to go here a few times a year for a blowout crab and prawn fest. You really should try it if you haven't already. They do weekend brunch but go on a Saturday not a Sunday, when it feels like rush hour on the London tube and equally difficult to fight your way to the place in the buffet.

Location: Unbeatable, amazing view back to downtown Seattle, on the water, over the West Seattle bridge and hang a left.
Entrance: Valet parking but really not needed; steps up to entrance and a few dodgy looking metal crabs hanging around called Art.
More on the Entrance: Once inside, stay calm. There will probably be a line of people waiting to be seated, screaming kids running all over the place and general chaos. It gets better.
Tables: All have a water view but you should ask for one anyone. Some are front row and some are cheap seats.
Service: Likely to be over-bearing and over-sweet. They have a living to make but come on, it's often too much to handle here. But persevere and smile sweetly back. On the plus side, they do look after you very well.
Food: Weekend brunch, all you can eat for a fixed price of about $40. There is a lot to eat so arrive hungry.
Price: See above
Seafood: This is why you come. Sure you can have the good American brunch items by the bucket load, but when you check out the mountain of cooked prawns and crab legs, you will probably decide to get messy and go large.
Utensils: Yes, provided. They'll even give you a demo on how to get the meat out of the claw.
Family friendliness: Very high. It's a great place to bring the family.

Posted by SeattleGrubster at 18:30 No comments:

Barolo Restaurant is a Buzzy Place to Be 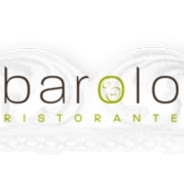 Buzz Buzz Buzz, energy alert, trendy alert (well, for Seattle at least), Barolo is a buzzy place to be.

Location: 7th and Westlake, just opposite The Westin Hotel, which is handy if you're staying there.  If you're not and you are downtown, it's still handy.
Atmosphere: Busy, buzzy, beautiful, bubbly.
Greeting: The kind of place where they are all smiles but forget your face two minutes later.
Bar area: Yes, to the left please. Bar seating and small tables. It gets packed at happy hour, which is from 3pm-6.30pm and half off (yes, 50% off) the menu. Nice.
Happy hour - See above
Food: Small plates are great - mussels, calamari, lamb burger and more - all good and all around $10 to $15
Drink: Reasonable wine list but nothing to get excited about
Service: Fine
Diners: Post work, slightly younger than average Seattle, noisy, stylish

Posted by SeattleGrubster at 18:18 No comments: 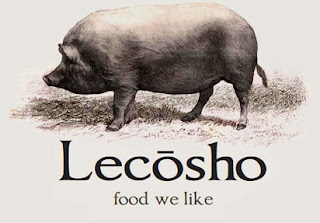 Location: Half way down Harbor Steps, between 1st and Western
Atmosphere: Noisy.  You have to shout across the table to be heard.  Maybe I'm just getting old.
Service: Efficient, knowledgeable, slightly sarcastic.
Food:  For a Brit like me, homely.  Good range of appetizers and simple but tasty main courses.  The special was Alaskan Salmon, simply grilled.  I had the roasted half chicken.  No need for sides.
Drink: Slightly over-priced wine list but not ridiculous
Diners: Pre-symphony crowd (it's close to Benaroya Hall), after work drinkers (good long bar).
Price: Mid 20's for an entree.  Good value considering quality and portion size.

Posted by SeattleGrubster at 17:19 No comments:

Blueacre Restaurant is Getting Popular 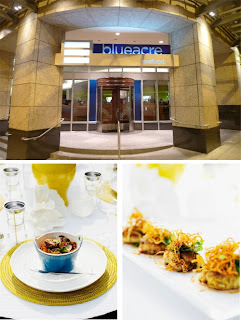 It's been open for about a year and the cavernous restaurant space that used to be empty most nights is now regularly populated with hungry diners.  But the bar is the place to be....

Location: 8th & Olive, downtown, opposite Pacific Place and near the Paramount, which makes it a good spot for pre/post theater or cinema munching.
Atmosphere:  Buzzier than it used to be. The bar is always busy and if there are just a couple of you, a more exciting place to be.
Service: Consistently good
Food: Plenty of good value sharing style dishes, heavy on fish and seafood but not exclusive.  Portion sizes are generous for the money.
Drink: Plenty of local brews on tap and some excellent value wines by the glass. They also do some mean cocktails.
Happy hour: Yes, until 6pm and if you smile sweetly they'll extend it a few minutes to squeeze in that extra order.
Price: Good value for money, considering the quality and size of the dishes. OK, I'll be more specific - around $9 for a plate to share.

Posted by SeattleGrubster at 11:25 No comments:

New Tom Douglas restaurant Cuoco is now open at 310 Terry Avenue North in South Lake Union.
The opening co-incided with the opening of Amazon's latest office on the campus there and I went along to check it out.

***UPDATE*** (4/8/11)
I actually bumped into the man himself, Tom Douglas, right outside Cuoco today.  I told him how disappointed I had been with my measly four raviolis for $22.  He apologized and said he was aware that on the opening day the portion control was all wrong.  He said he has since corrected this and now you get twelve raviolis for $22.

Location: Could be mistaken for an Amazon canteen, what with it being right there in Amazon land.
Atmosphere: Actually very nice - roomy, dark but not too dark, trendy, buzzy.
Service: Nervous, smiley, attentive. Waiter knew the menu and admitted to being up half the night learning it for the opening day.
Food: Appetizers, pasta.  Pasta offered as 'small dish' and 'large dish'.  I had the Artichoke Ravioli, which was tasty but over- oiled.
Price: Heart attack for what you get.  My Ravioli was $22 for four small pieces and what looked like wood shavings on top. Here's an extract - Waiter arrives with our main courses ludicrously small baby portions that wouldn't satisfy my three year old. He presents my Ravioli and my colleague's Lasagna on the table with a flourish.  Me: "Ermmm, excuse me but I ordered the large dish size not the small dish size."  Waiter: "Yes Sir I know, this is the full size." Me: Choking on my tap water, "That's ludicrous, four pieces of Ravioli for $22?"  Waiter: "Well Sir, it is very rich."  Me: "The only thing rich here is Tom Douglas."

Nuff said, until they sort out the portion control and bring the prices down, I won't be coming back.

Posted by SeattleGrubster at 08:26 No comments: 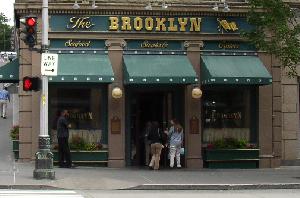 Atmosphere - old boys club, expense accounts, dark but not too seedy, old fashioned.
Service - patronizing, smelly breath (maybe we were unlucky but it was very off-putting), got our order wrong.
Food - great quality; overpriced oysters.
Price - mainly OK but not cheap - $130 without tip for two of us and we didn't drink that much.
Company - the wife, delightful as always
Single diners - catered for, thanks to some ludicrously high backed chairs towards the back of the restaurant that are actually quite cool.

An oldie but a goodie.

Posted by SeattleGrubster at 18:26 No comments:

This is one of my weekly take out spots, always busy but the food always arrives swiftly. Just time to sneak in a drink at the bar before the bag arrives.

Location - top floor of Pacific Place shopping center
Atmosphere - buzzy, always seems to be busy no matter what time I go.
Food - pretty good.  My favorites are the Chicken Pad Thai and the Crab Rice Special.
Portion Size - two main courses does a full meal for two plus left overs for a reheat the following day
Service - always friendly
Price - around $12 to $15 for a main course
Bar Area - you can sit at the bar and just drink or eat and drink - a good option for travelling salesmen.

Posted by SeattleGrubster at 18:20 No comments: 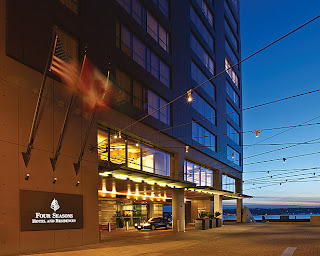 Who'd have thought it? A great value meal at the Four Seasons? Absolutely!  Just wander into the bar, take a seat, enjoy delicious happy hour cocktails and some great small plates and small prices.

Location - downnnnnnntownnnnnn
Atmosphere - high class hooker coolness meet classy meet this is Seattle so it's all above board, honest guv (it really is very nice).
Price - happy hour is excellent value but even the small plates and drinks outside of happy hour are usual downtown Seattle prices.
Dress code - smarter than your average bear but you can still wander in with a pair of jeans and not feel out of place. Well it is Seattle after all.
Service - excellent, smooth, cool as a cucumber

This really is a lovely place to spend a couple of hours.
Posted by SeattleGrubster at 18:16 No comments:

Chinook's is Great for Brunch 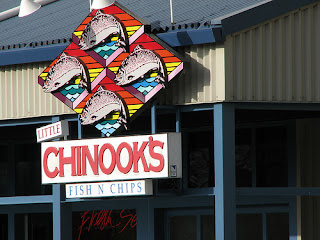 An excellent choice for brunch, with or without kids.  I've not been at other times.

Location - right on the marina, just below Ballard bridge
Atmosphere - bright and bustly - plenty of room
Service - sometimes slow but they bring warm scones to keep you going, which keeps the adults and kids happy
Food - all the usual brunch items, with some interesting seafood fry ups.  Generally good portion sizes and good quality
Company - went with the family; it's a family fave
Need to book - no you don't (at least for brunch)

Posted by SeattleGrubster at 18:10 No comments: 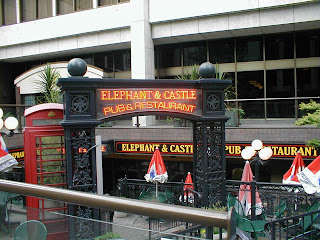 Fitting to review an 'English' pub for my first posting although I didn't sample the food.
Atmosphere - nice and English boozer-y, not threatening, buzzy.
Decor - tacky as hell but I liked it.
Beer - good selection of local and imported beers. London Pride and Bass was off which was disappointing but the Old Speckled Hen was pretty good and not too speckled.
Food - didn't try any but from what I saw coming out of the kitchen, looked standard pub grub fayre and quality.
Company - ex-colleagues/friends. They enjoyed themselves.

Posted by SeattleGrubster at 09:28 No comments: